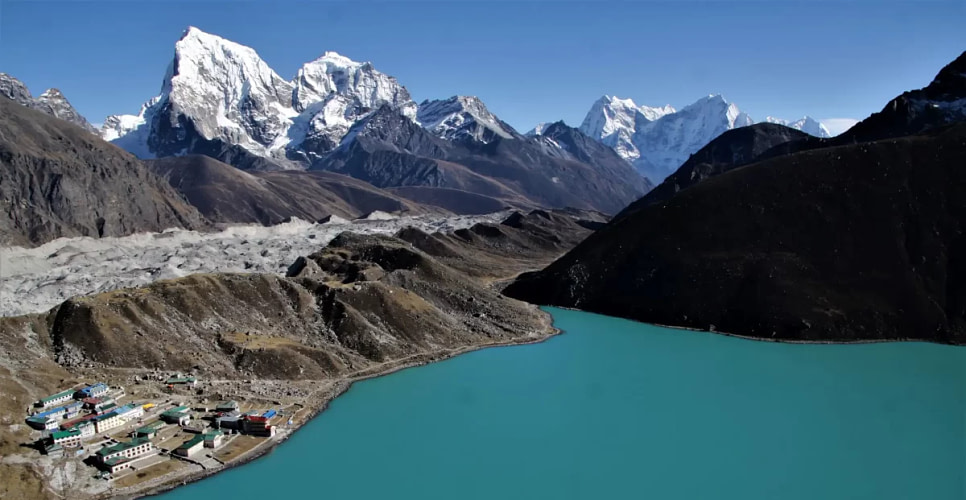 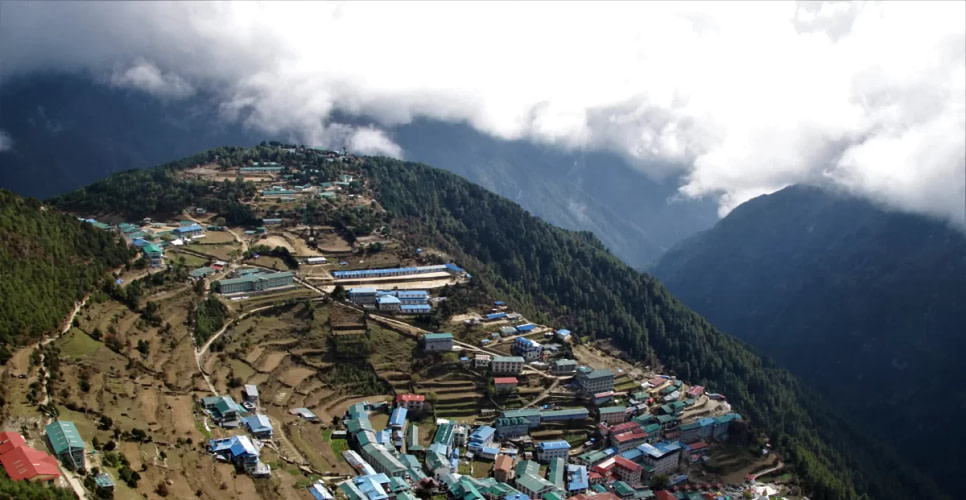 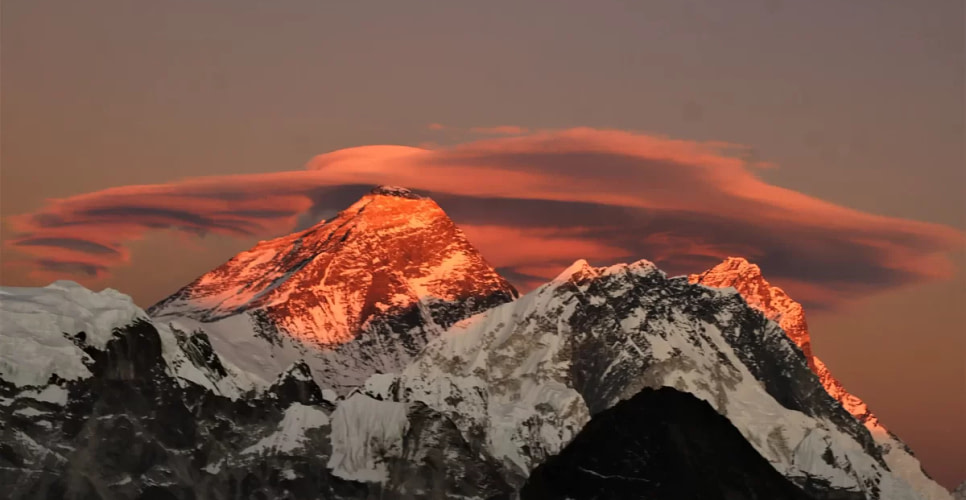 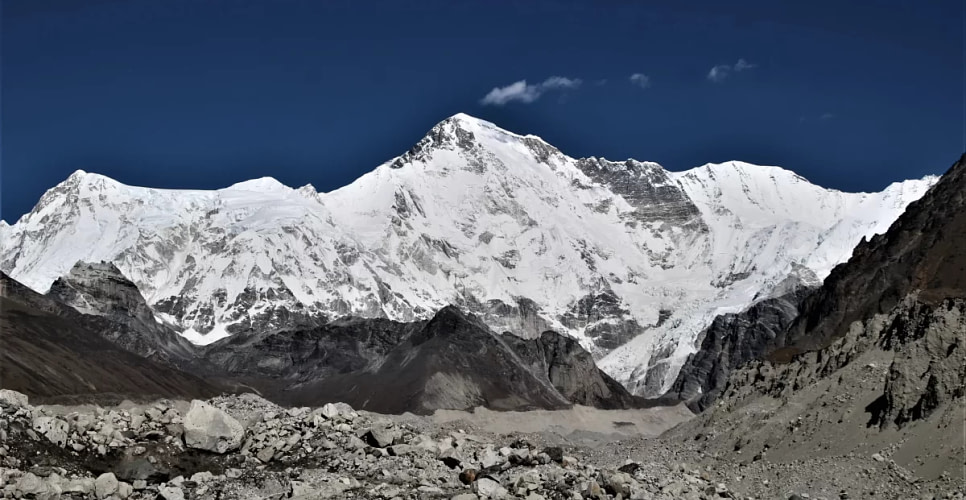 Everest Gokyo Lake and Gokyo Ri Trek is an off-the-beaten hiking trip in the Everest Mountain region. If you are planning a hiking trip but would like to avoid the tourist traffic, then it is the best alternative trekking trail next to Everest Base Camp.

This amazing trekking trail splits from the main Everest Base Camp trekking route and goes through some of the hidden Sherpa villages along the bank of Dudh Koshi River leading to the Gokyo glacial lake system.

The Gokyo lakes are elevated from 4700m to 5000m range and are formed from the seepages from the nearby glaciers including the world’s longest Himalayan glacier Ngozumba.

Among these lakes, Dudh Kunda is the most popular as it carries a huge religious value among Hindus and Buddhists. Hundreds of Hindu Pilgrims take a cold bath at this lake during the Janai Purnima festival. Ice skating, figure skating, and Ice hockey were introduced in 2019 for the lake is frozen during winter.

Apart from the lakes, Sagarmatha National Park is home to different flora and fauna including some endangered species like the Red Panda, Musk Deer, and Snow leopard. The majority of vegetation comprises Rhododendron, Fir, Pines, Junipers, and alpine shrubs. Whereas Himalayan Thar, Jharal, Himalayan Pika, Impeyan Pheasant, Tibetan Snowcock, and other smaller species are a common sighting.

The most famous settlement, Namche Bazaar is a market center and is an amalgamation of traditional and contemporary houses during Everest Gokyo Lake and Gokyo Ri Trek Even with the majority of the Sherpa community, people from other ethnic communities now reside and run businesses here. An acclimatization trip to Khumjung is a mandatory side hike where you can explore more about the Sherpa culture. Besides, Everest View Hotel is also a popular destination among travelers.

After reaching Gokyo, a small settlement on the bank of the Gokyo lake is composed of teahouses and lodges offers a beautiful view of the mountains reflecting on the Gokyo Lake. From here, a hike to Gokyo Ri offers a panoramic view of Mt. Everest, Makalu, Cho-Oyu, Gyachung Kang, Lhotse, Nuptse, and other lesser mountain peaks. If the time and the situation are favorable then you might be able to visit the fifth and the sixth lakes.

Vertex Holiday organizes the Everest Gokyo Lake Gokyo Ri Trekking itinerary which is a cost-effective trekking package. If you are planning a once-in-a-lifetime vacation in the Himalayas, then this is one of the best hiking trips for you. For more information regarding maps, equipment checklist about this wonderful holiday package, contact Vertex Holiday.

Arrive in Kathmandu (1300m), transfer to the hotel and dinner with the Nepali cultural program.

Namaste and welcome to Nepal. As you arrive Kathmandu, Vertex Holiday’s airport representative will receive you at the airport and assist you to the hotel.

After getting refreshed,  a short briefing about Everest Gokyo Lake and Gokyo Ri Trek and orientation will be held by our trekking leaders. In the evening will be dinner program at a Nepalese restaurant with cultural music and dance . Overnight at the hotel.

After breakfast at the hotel, set out for the sightseeing tour in Kathmandu, these include UNESCO listed world heritage sites. Kathmandu is a city of temples and medieval arts and architecture.  Pashupatinath temple, Boudhanath, Swayambhunath, Kathmandu Durbar Square in Kathmandu are the major attractions .

However, there are in total seven world heritage sites in the Kathmandu valley. Returning back from the sightseeing tour,  a short trip briefing will be conducted by our trekking leader. Overnight at the hotel.

After breakfast, drive to the domestic airport of Kathmandu for the flight to Lukla. During the flight  the picturesque  Himalayan range is visible. Landing at Lukla, you’ll meet the rest of the crew who will accompany us during the trekking.

Then the hike begins smoothly through the easy  trail with the smell of the Yak dungs with the chirping of the birds. The trail goes through several small settlements and eventually crossing suspension bridges over the Dudh Koshi River, we reach Phakding . Overnight at lodge.

After the delicious breakfast, we begin our Everest Gokyo Lake and Gokyo Ri Trek  which is a bit tougher today. Crossing bridges, we reach to the entry gate of Sagarmatha National Park at Jorsalle. Then the route starts to get tougher as it ascends uphill. The prayers carved on the large stone walls are intriguing .

The charming view of Everest can be seen for the first time of the trek. We walk continually till we reach to the horseshoe-shaped Namche Bazaar, which is one of the busiest settlements in the Everest region. Overnight at lodge/tea house.

The town of Namche Bazaar during Everest Gokyo Lake and Gokyo Ri Trek is equipped with all sorts of cafes, bars, clothing and equipment stores, and many other places. Basic facilities are available at the health post/hospital, school, trade centers, and others.

It is even known as the gateway to Everest. Today is an acclimatization and exploration day.  So, we’ll hike exploring the amazing town of Namche along with its neighboring parts of Khumjung and Everest view hotel. The Sherpa Culture museum is an optional place to explore. Back to lodge and rest. Overnight at the hotel.

Our  trek to Everest Base Camp continues climbing the stone steps of the town . Reaching the top, incredible mountain view appear in front of our eyes.

The chances of seeing the wild animals including Himalayan Thar, Musk deer and the national bird Danphe are high. After some easy plain trail with a descend to Kyanjuma, we climb up steadily through the rhododendron forest and reach to Phortse which lies under the shadow of Mt.Taboche. Overnight at lodge.

After the Phortse village , the trail continues crossing the bridge over the Dudh Koshi River and continue walking through the forest region. We will be witnessing the biodiversity of the region. The cascading waterfalls are one amazing experience of the day. We’ll stop at Luza for a tea break then continue through the sandy trail to reach the Machhermo village. Nearby the village, the Himalayan Rescue Center lies, which is to treat the people having altitude problems. Overnight at lodge.

Enjoying the view of the Dudh Koshi valley, we begin to trek higher with a destination of Gokyo today. Mt.Thamserku peeps from the near horizon. From Phanga, we trek down to the Riverside and climb again through the Ngozumba glacier to reach  to the Gokyo  or Dudh Pokhari .

Gokyo lake is situated at an altitude of 4800 meters with a small settlement beside the lake. You may find it tough to deal with the alpine altitude, but the following day it will become normal as we go over 5300 meters. Overnight at lodge.

It is an exploration day. Early in the morning , we hike to the Gokyo Ri in order to catch the glimpse of sunrise . The view of Everest, Cho-Oyu, Gyachung, Lhotse, Nuptse,  Makulu and other smaller peaks can be seen from the Gokyo Ri . Then we come down for lunch at the lodge. Then we can visit the fifth and the sixth lake. Exploring the natural wonders, we trek down to the Gokyo valley and rest. Overnight at lodge.

The wonderful sunrise view over the snowy peaks is stunning, but we have to leave after breakfast. Besides, the fabulous Mt.Taboche and Mt.Cholatse will shed their smile at you.

Even Mt.Thamserku and Mt.Cho Oyu can be seen as you reach the ridge. Then we descend gradually passing Machhermo and Luza village and finally reach to Dole. Overnight at lodge.

After breakfast, we begin to descend to Phortse Thanka through the astonishing rhododendron forest. We can see the cascading waterfalls and beautiful wildflowers from the trail.

Some of the wild animals are other attractions of the trekking. The spectacular Everest region peaks energize you to walk in this beautiful landscape. After having lunch, we trek further to the Namche Bazaar and rest. Overnight at lodge.

This is the last trekking day. We have breakfast and begin the excursion through the steep trail from Namche Bazaar. Checking out from the national park counter, we reach to Monjo and head further crossing the suspension bridges.

Passing Phakding, the normal route begins. We gradually reach to our concluding point at Lukla. We celebrate our successful trek with all the team members. It is the last day of the trek for our crew. Overnight at lodge.

Fly back to Kathmandu /Rest day.

It’s time to bid farewell to this Himalayan town and fly back to Kathmandu. The Himalayan peaks that became familiar to us can be explored for the last time if the weather is clear.

Landing in Kathmandu, you will be assisted to the hotel and take a rest. Overnight at the hotel.

This is a great day to explore the ancient town- Bhaktapur. It is a half-day trip. Bhaktapur Durbar Square is an old Newari town, where medieval architectures, pagoda style temples, pottery square, and various other attractions lie there.

After the tour, drive back to Kathmandu and join the dinner in the evening at a typical Nepali restaurant. We have a special moment. Overnight at the hotel.

Note: in case the flight gets canceled, today is the reserve day for that. Weather change is normal in the mountainous region.

Having a good memorable trekking experience with Vertex Holiday our representative will drop you at the airport for your final departure.

We are updating the contents. 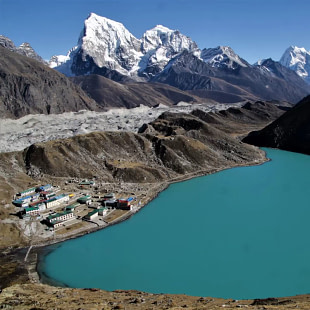 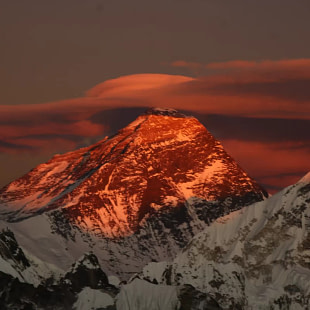 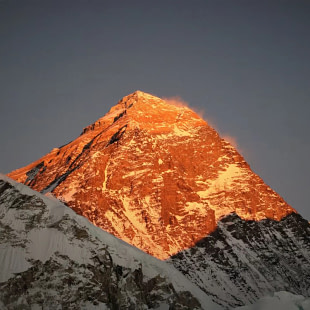